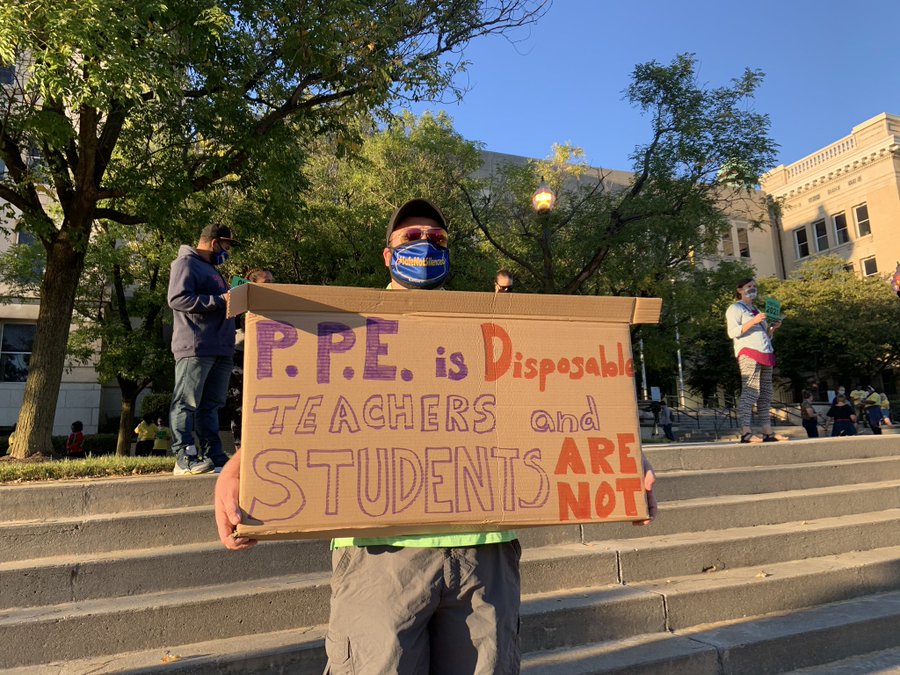 “I hear from teachers every day who are dying to get back in the classroom,” Hogan said. He reported that Oct. 1 was Maryland’s first 24-hour period without a coronavirus death since March 28.

Hogan’s calls come one day after Baltimore educators and parents, organized by the Baltimore Teachers Union, rallied in opposition to reopening schools—at least until districts are provided the necessary resources to prevent the spread of COVID-19, such as rapid testing; personal protective equipment for educators, staff, and students; repairs to HVAC systems to improve ventilation; and plexiglass windows in every classroom. Teachers say they don’t want to resume in-person instruction if it means putting lives at risk.

“I’m not going to stand here and think about who are the two or three educators in my building who are going to die because we decided to open when we weren’t ready,” said Franca Muller Paz, a teacher and union building representative for Baltimore’s City College High School at the Sept. 30 rally.

On Sept. 2 (dubbed “a national day of action” by the American Federation of Teachers), teachers in hundreds of cities all over the country protested unsafe reopenings. Teachers are urging Senate Republicans to approve the HEROES Act, a proposal by Democrats that would provide $30 billion to help schools reopen safely. Districts that are reopening face a teacher shortage as hundreds of educators apply for leave to not physically go to a classroom.

During the Baltimore rally, 30 or so parents, students, and teachers laid down on the ground demonstrating that they or their students have preexisting conditions that make them more susceptible to COVID-19.

“I would be concerned that if we were to reopen too early, that we would see that community transmission,” said David Shaughnessy, a sixth grade science teacher at Mt. Royal Elementary School. “And we would have teachers dying, like we see in other states.”

Shaughnessy held a sign that read, “PPE is disposable, teachers and students are not.”

“No decision has been made about returning to the classroom, and we will update our City Schools community about any next steps on October 16,” Baltimore City Schools said in a statement to TRNN.

This week in The New Yorker, local Baltimore journalist Alec MacGillis made the case for reopening Baltimore schools, arguing low COVID-19 hospitalization and death rates among children have allowed local private schools to reopen, while many public school students who have been unable to access online learning are being left behind.

However, Parent and Community Advisory Board (PCAB), the board that lobbies on behalf of city school parents to the school board, says the district lacks the plans and resources to reopen safely, even as they acknowledge in-person instruction is the best option for many students.

“I don’t believe that it is safe to open at this moment,” said PCAB board member and parent advocate Angie Winder, who helped organize the protest and whose daughter goes to Baltimore City public schools. “They have not properly prepared the schools to open for our students.”

City Schools has begun to provide limited opportunities for small group, in-person learning for ESOL (English as a second language) and special education students, which they say follow “a host of procedures to protect both students and staff, while also aligning with local, state, and national guidelines.” The Baltimore Teachers Union opposes these as well, saying they, too, are unsafe.

Other Baltimoreans agree with Winder. Melissa Schober, a public school parent and advocate argues many safety measures public health experts say are necessary to stop the spread of the virus, such as handwashing and good ventilation, are impossible in many of Baltimore’s decrepit school buildings.

This week, the American Academy of Pediatrics reported that the childhood infection rate has surged to 10% as students began to return to school in September. Meanwhile, the CDC found that severe incidents of COVID-19 in young people remain relatively rare, but are correlated with preexisting conditions. 1 in 5 Baltimore City public school students have asthma. The CDC also said a review of international studies “suggest that in-person learning can be safe in communities with low SARS-CoV-2 transmission rates.”

While state officials put Maryland’s coronavirus positivity rate at 2.88%, Johns Hopkins University, which is helping lead the global response to the pandemic, says Maryland’s rate is over 5%, the internationally recognized threshold for safe reopening.

Some have warned of the dangers of students missing instructional time.

But the majority of school buildings in Baltimore, particularly their aging HVAC systems, are in such bad condition that students were already missing significant amounts of instruction time even before the pandemic, a Johns Hopkins study found earlier this year. “Problems with heat and cooling accounted for lost school time of more than 1.2 million hours, equivalent to more than 179,000 days, over the last 5 years, representing about 80% of the time missed,” the report said.

In Baltimore, dirtbikers known as the 12’O’Clock Boys popped wheelies in solidarity as they passed. Winder called economic incentives like the ones Hogan introduced an empty gesture.

“My child is not up for sale,” said Winder. “To me, he’s playing politics with children.”

The school system recently laid off 450 teachers and support staff due to a $21 million budget deficit, and could lose out on tens of millions of dollars due to declining attendance during the pandemic.

Winder acknowledged that many parents face hardship helping their children with online learning. Some students are not getting the services they need at the moment, and that’s because a lot of students don’t have internet access.

“We need to fill in the digital divide,” she said. “I know a lot of students who still don’t have access to a device.” Winder argues the district should devote more resources to train parents and grandparents on how to help their students access online learning.

The district has spent millions of dollars purchasing chromebooks and hotspots for students, but it hasn’t been enough. Around 200,000 Baltimore households with school-aged children lack access to high speed internet or a computer, a May 2020 Abell Foundation report found.

In May, Hogan cited a loss of state revenue due to economic shutdowns when he vetoed Kirwan, a multibillion dollar proposal to increase investment and overhaul Maryland public schools, which he has long opposed. Kirwan was the product of years of review driven by a 1996 court ruling that the state had failed its constitutional mandate to educate low income and students of color. A 2015 Department of Legislative Services study found the state continues to shortchange Baltimore’s schools by $358 million a year.

Muller Paz, who is running an insurgent campaign for City Council as a Green party candidate, says the increased investment is needed on the federal level to fund unemployment insurance, childcare vouchers, or other alternative childcare measures. “I think we need to do more like a city as a state and as a country, to really be looking out for families so they can safely stay home,” she said.