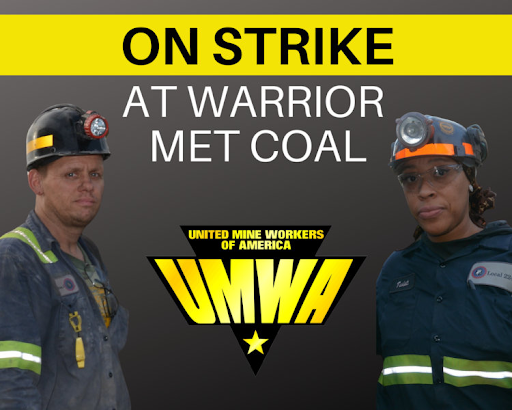 Miners in the United Mine Workers of America union have been on strike in Alabama since April. This is shaping up to be THE key battle of the COVID Era labor rebellion. Black miners are a key force in the striking union locals. As the UMWA prepares to celebrate 100 years since the Blair Mountain War, it is fitting that in 2021, Black miners march at the forefront of the American labor movement as they did in 1921.

Black workers have played key roles in the COVID Era labor rebellion. Some examples include: COVID safety walkouts and sickouts in Baltimore at a wastewater treatment plant and at DPW solid waste facilities; wildcat strikes in meatpacking, auto and other factories, again over COVID safety; important strikes by nurses across the country, and the bakers’ union, the Bakery, Confectionary, Tobacco Workers and Grain Millers (BCTGM) strikes at the Frito Lay factory in Topeka and Nabisco factories in 4 states. Additionally, Black workers are often in the lead in the current retail unrest. In stores and restaurants, mass quitting by entire staffs, and general unrest, have forced big corporations to offer $15 an hour plus signing bonuses and benefits.

United Mine Workers of America District 20 locals 2245, 2397, 2368 and 2427 went on strike against coal company Warrior Met beginning on April 1, 2021. This company produces coal used to make steel in Asia, Europe and South America. Warrior Met was formed from the wreckage of Walter Energy, which went bankrupt in 2015. Warrior Met reported net income of $302 million in 2019, but $35 million of losses due to COVID disruptions in 2020. Miners gave up over $1.1 billion in pay, overtime, benefits and other compensation to help the company meet its bottom line during tough times. The 1,100 UMWA union miners are fighting for what’s theirs.

Warrior Met has not been bargaining in good faith and the miners have not accepted any contract offers. Warrior Met is no small fry operation. It has 1,400 employees at 3 mines in Alabama, a large number considering the continuing expansion of the use of machinery in coal mining. The days of coal miners lying on their back under a 3-foot-high ceiling, digging at a coal face with a pick, are long gone. But Warrior Met is also like a tentacle reaching out from the very richest investors. The miners have picketed outside the offices of 3 hedge funds in New York City, including the notorious BlackRock. Hedge funds are the whales of Wall Street, representing the billionaires and other super-rich investors. They are battering rams of the ruling class against the interests of working people.

Warrior Met’s behavior has been sinister during this strike. In May, wastewater runoff was running freely from the mines into local creeks. This toxic junk has caused huge problems for the people who live in mining areas in West Virginia. The UMWA points out that union miners have a track record of better containment of this poison. Unions protect our Earth and our future: the children. On June 7, the UMWA announced that picketers have suffered vehicular ramming on 3 incidents. Union busters may have created this terror technique. It is not a coincidence that vehicular ramming has been used by police and Klan-Nazi thugs against the Black Lives Matter movement since 2017 – resulting in at least two murders.

We can still support the striking coal miners – with our money and our power as a union. You can mail a contribution to the UMWA strike fund the old-fashioned way, or donate online at https://umwa.org/umwa2021strikefund. There are mouths to feed and bills to be paid, and clothes and school supplies to be bought for the strikers’ children. BTU could organize a public demonstration to support the miners, to get them new publicity.