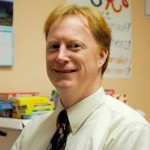 James Blanchard is a Member-at-Large

James Blanchard has been working as a school psychologist at Mt. Royal Elementary/Middle School since 2003. James works with students who are either on an IEP or need to be on one. He deals with students from first grade up to eighth grade.

“I deal with a lot of different issues,” James said. “There is a wide age range in this school and each student is different.”

In addition to counseling his 20 or so student case load, James is responsible for planning parent workshops and other programs to help the students he works with. His primary goal is to make sure the students at Mt. Royal get the services they need.

James is a native of New England and said he chose to come to Baltimore because of the direct interaction he gets to have with students.

“When I was looking for internships and jobs, it was obvious that by coming to Baltimore I would have more of an opportunity to work with students directly,” James said.

James has been a member of the BTU for several years and says he likes the opportunities the union gives him. “I love how we get to share what we do with other union members,” James said. “I get to hear how other psychologist and teachers work and solve problems.”

James also credit’s BTU President, Marietta English’s inclusive leadership style that has helped him excel in the union and in his profession.