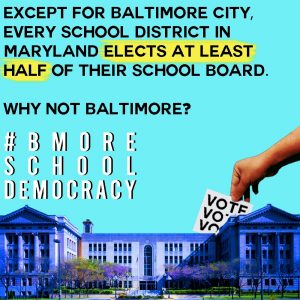 The Baltimore Teachers Union is working in coalition with a variety of individuals and groups to pass legislation that would transform Baltimore City’s school board into a hybrid model that is accountable to the people of the city and puts us in line with the rest of the state.

Did you know that?

● Baltimore City is currently the only jurisdiction in Maryland whose entire School Board of Commissioners is appointed/unelected. In 2022, the board will expand from 10 to 12 seats, with the two additional seats being elected rather than appointed. Of the 23 other Maryland County School Boards, 19 are fully elected, and 4 are an appointed / elected hybrid, with only Wicomico County having more appointed than elected positions. We believe this glaring difference is a vestige of white supremacy that says self-governance and democratic structures that empower citizens to choose their own representatives is a right that black Baltimore can’t be trusted with.

● Mayor-Elect Brandon Scott supports expanding the amount of elected seats on our school board and has shared his belief in a hybrid board with a supermajority of the seats being elected.

● In order to avoid only the rich, powerful, and already politically connected a shot at running a successful campaign we will ensure that school board seat campaigns are eligible for public financing.

● Baltimore City is one of two jurisdictions in Maryland where board members are not paid for their work (see graphic breakdown on page 2). Other districts pay their school board members anywhere from 1k-25k a year. Although Harford County is unpaid, members may receive up to $3,600 for related expenses. We believe that commissioners should be paid for their important work, otherwise these positions will only be accessible to the professional class who can afford to work 20+ hours a month for free.

● Many leaders in positions of power tout their respect for the intellect and ability of our students yet we don’t trust our student commissioner with full voting rights to weigh in on the issues in which they will be most directly impacted. The student commissioner’s voting rights are explained here. We believe that the student’s voting rights should be expanded to include at a minimum the ability to vote on personnel, capital and operating budgets, school closings, reopenings, and boundaries, and to participate in executive/closed sessions and special meetings of the board. These changes are not radical and will simply bring Baltimore City in line with the rest of the state, whileensuring a structure where public officials in positions of power are accountable to the people they serve.

TO GET INVOLVED AND TO USE YOUR VOICE AND ABILITIES TO CREATE CHANGE: Please take 60 seconds to fill out this form yourself (if you haven’t already) in order to stay up to date with the campaign and ask friends / colleagues to do the same! https://forms.gle/kZgSYYpqMTkfS1Hf8

When you share this information with your friends, colleagues and across social media platforms, help us by using the hashtags #ElectedBmoreBoard and #OurSchoolsOurBoard in all your posts to spread the word! 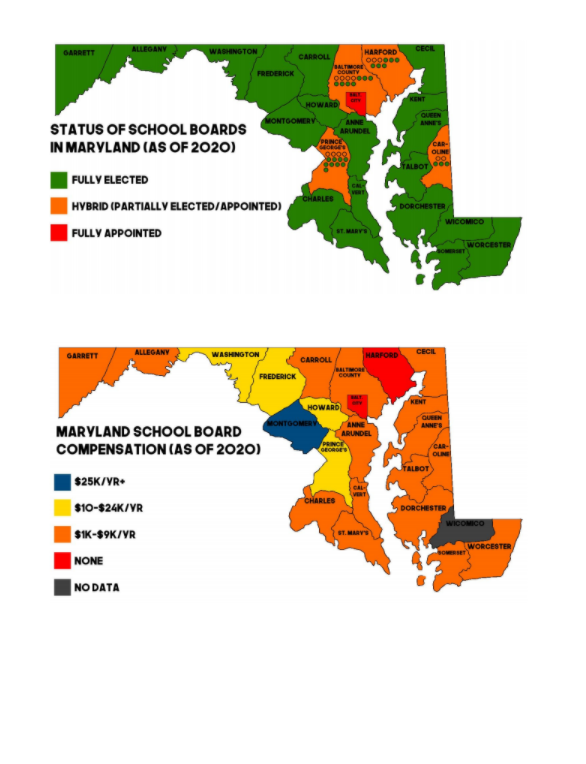