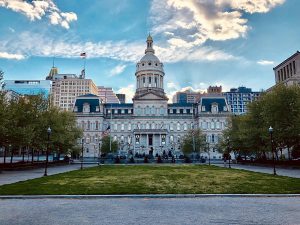 By Patrice Pilgrim – Chair of the Baltimore Community COVID-19 Taskforce

I have always believed that it is the job of everyday citizens to hold their leadership accountable; that it is our job as a community to make them hear and act on our various concerns. That thought was at the forefront of my mind when the COVID-19 Taskforce last met with Mayor Brandon Scott. During the last meeting between the Taskforce and Mayor Scott, he expressed interest in getting more information on a few issues.

Mayor Scott wanted to know what accommodations–if any–were being given to staff as well as students. He also expressed the desire to get specific information on how the pods were working and how their function differed from that of a hybrid learning situation. He also wanted to hear the most current data that we had on the status of ventilation and which schools have an adequate ventilation set-up, compared to others that might not.

Mayor Scott wanted some serious information from us, but what we wanted from him was his public endorsement of our demand that not one more teacher, staff member or student be sent back into school buildings until these buildings were safe–as defined by the metrics of the Maryland Department of Health and the CDC. We shared with him that based on the data from the relevant authorities, the district’s plan for reopening schools was reckless and poorly organized. We explained that this plan provided little to no clarity but that instead, the plan created a host of other questions that the district was either unable or unwilling to answer.

Staff members were scared and angry – a concerning mix of emotions to be sure. They were afraid that they would be forced into an unsafe environment–some of them were already in such a situation–and that they would risk possibly taking the virus home to their family members. They were angry that, yet again, the District was showing a total disregard for the input of teachers–the same teachers that they claimed to be grateful for. No matter what actions were taken, the District seemed hell-bent on moving forward with this reopening plan that did not clearly define what steps would be taken and what resources had been allocated to support its implementation.

In short, there were too many questions and too few answers to them. The Taskforce and other stakeholders kept brainstorming ways that we could highlight our plight and gain additional public support. Then, word came down from the District that expansion of in-person learning for an increased segment of the school population had been pushed back another two weeks. While this was seen as a victory by the Taskforce as well as the BTU and other stakeholders, the war still remains.

The date when even more teachers and staff will be forced back into buildings is fast approaching and the fear and uncertainty of the past weeks is surging forward again. What can members do? What can the other concerned stakeholders do in the face of such a scary prospect of going back into buildings that we know are not safe? The answer, though not simple, is still actionable. There needs to be a buy-in to the concept of holding the District accountable. How we do that is going to be up to all of us. The ventilation dashboard that the district put up, at the time I am writing this, is currently down. We need to keep up the pressure on them to have it back up and reporting accurate information. That means that the community, in addition to us, the staff of City Schools, needs to reach out to the Board of Commissioners and Dr. Santelises demanding that they fix and update the dashboard so that we can track the status of a ventilation upgrades.

It also means that we as members of the BTU, the Taskforce and the community, need to ensure that not only are we aware of what the metrics of the Maryland Department of Health and the CDC are, but that we understand what the District’s Health and Safety Guidelines are supposed to look like when properly executed. We need to ensure that the District keeps its word and executes every safety precaution that they have pledged to. Additionally, we need to support each other through all of this. Just because some of us can shout does not mean that we should discount those who can only whisper. If enough people whisper, their voices can be heard. If enough of us who can shout do just that, pretty soon what we are shouting about will be all that can be heard. Let’s continue to do what we can with the resources that we have and support each other.